Home for the Holidays
CHRISTMAS CONCERT 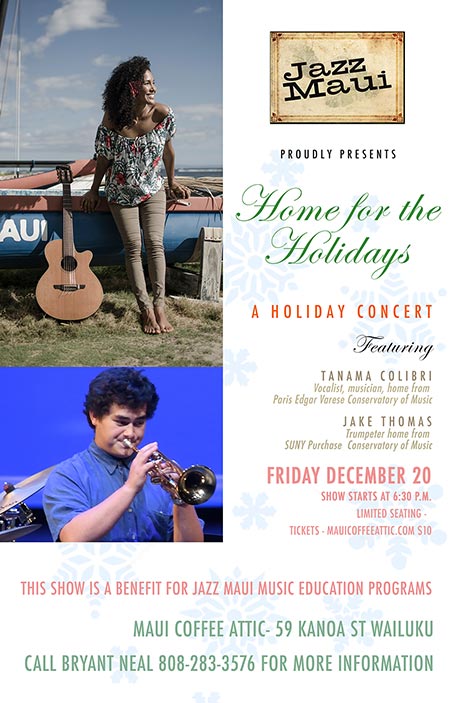 Jazz Maui presents “Home for the Holidays”, a Christmas concert featuring Jake Thomas and Tanama Colibri, on Friday, December 20 at the Maui Coffee Attic, 59 Kanoa Street, Wailuku. Doors open at 6:30, show begins at 7pm. Tickets are $10 per person and are available online at mauicoffeeattic.com.

“Jazz Maui is happy to showcase these talented individuals and welcome them home for the holidays,” says Bryant Neal, executive director of the nonprofit organization. “Jake grew up taking advantage of all of the performers and teachers that Jazz Maui brought to Maui as part of its music education program. Tanama performed at Jazz Maui’s East Meets West Festival in 2017. Afterward, both she and Jake were invited to perform at the Blue Note Hawaii with Mike Lewis.”

He added that there is only seating for 60 at Maui Coffee Attic so tickets are limited. Proceeds benefit Jazz Maui’s music education programs.

For more information, call Bryant Neal at (808) 283-3576 and for tickets visit www.mauicoffeeattic.com 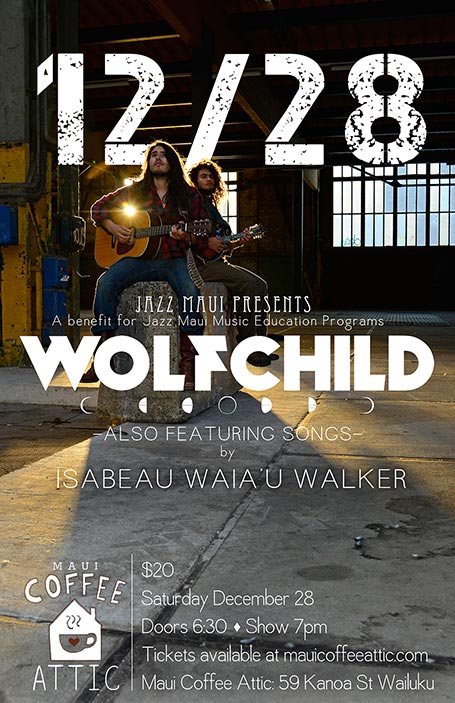 Wolfchild is a Seattle-based Indie Folk Rock music group. Their official music video “Runaways” received a favorable review by the Huffington Post and the band was featured recently in a segment about the Seattle music scene, which aired on the Travel Channel. The band has toured with artist Sawyer Fredericks, 2015 Spring Season winner of the popular television show “The Voice”. Gabriel Wolfchild made his national debut on the show that same season and he and Fredericks became friends. Their recent tour crisscrossed the US including stops at the Troubadour in Los Angeles, the Egg in Albany and The City Winery in Nashville.

Singer-songwriter and musician Isabeau Waia’u Walker has been described as an independent alternative folk rock chick. Now based in Portland, Oregon, she is a firm believer in the power of stories shared through song.

“Gabriel and Eli participated in summer music camps we produced early on when we brought in LA Music Academy,” says Bryant Neal, executive director of Jazz Maui. “Isabeau is from Wailuku. It’s great to have them back on Maui to perform. Both are accomplished and have been quite successful.”

An Intimate Evening with Justin Kauflin and Friends

Jazz, Blues, and Beyond! 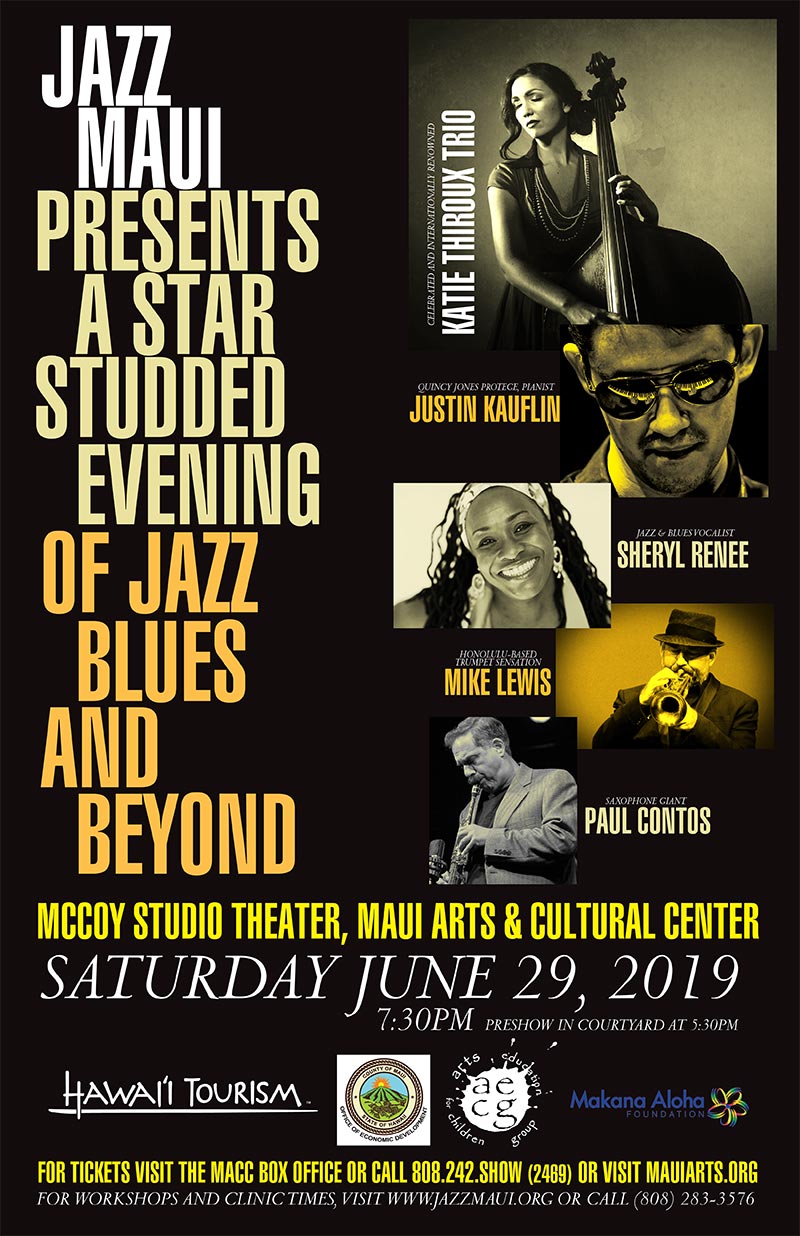 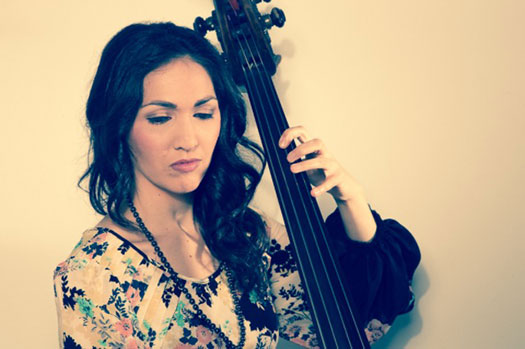 The celebrated and internationally renowned bassist and vocalist, Katie Thiroux, will light up the night with her all-star trio supporting four knockout guest artists.

“Justin is simply a beautiful cat…you can feel it in every note he plays.”
– Quincy Jones

“Sheryl received the “Presidential Seal of Approval” when selected to perform the National Anthem for President Barack Obama in 2009; Witek is all class and groove. His time is impeccable, he has his brushwork down, he knows when to open things up.” – All About Jazz

Keep on Keepin’ On 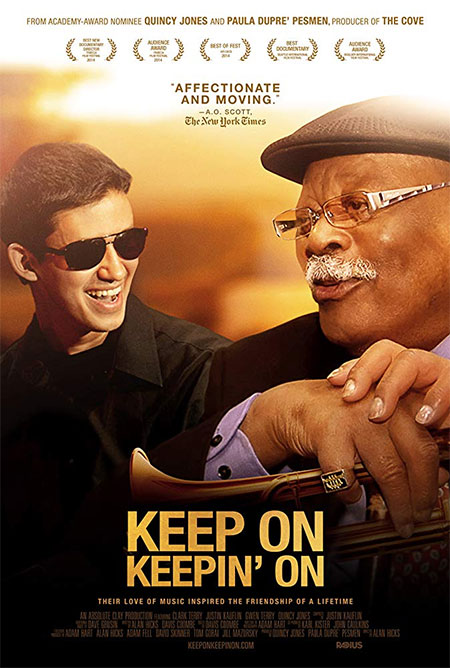 A documentary that follows jazz legend Clark Terry over four years to document the mentorship between Terry and 23-year-old blind piano prodigy Justin Kauflin as the young man prepares to compete in an elite, international competition.

Q & A with co-producer Justin Kauflin after the movie. 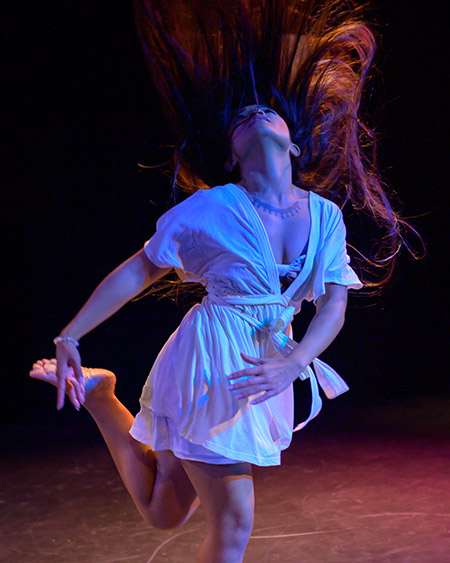 Hip Hop
a workshop that centers Hip Hop culture as the heart and soul and brings to focus the ways in which Hip Hop dance has brought joy and resilience to our communities through intercultural and intergenerational ciphers. dancers will be encouraged to activate their innate groove and discover a collective orientation towards a more harmonious future.

Rooted Rhythms
a movement exploration workshop that engages rhythms and dance traditions of the African diaspora. through soulful song and polyrhythms, dancers will seek to deepen their connection with land and lineage through a grounded release and a repetition of flow. elements from contemporary dance will further encourage dancers to explore the relationship between the earth and sky – the seen and the unseen.

in8 flow
participants will explore what it means to embody the individual within the collective – finding one’s innate flow through rootedness in the natural elements, spiritual essence, and fundamentals of movement found in hip hop, african diasporic, and contemporary dance.

All classes $10 collected at location.

Matt Witek (Drums) “Witek is all class and groove.” – All About Jazz www.mattwitek.com 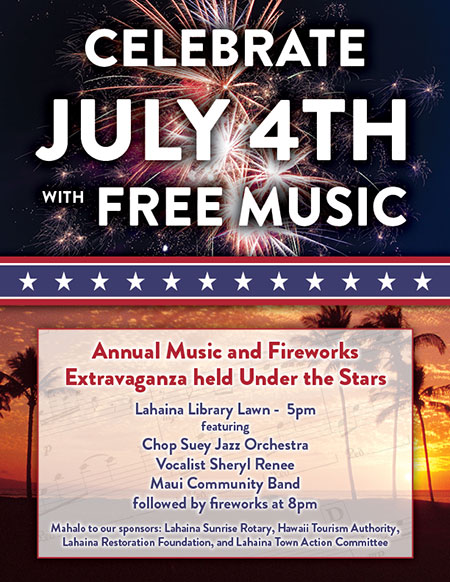 Concert in the Park

Jazz at the Shops

Mahalo to our supporters: Hawaii Tourism Authority, Arts Education for Children Group, and Outlets of Maui 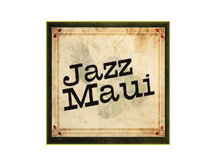 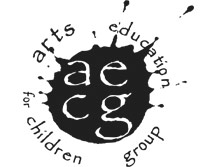 SAMMAY (Samantha Peñaflor Dizon) is the daughter of Yolanda Peñaflor Dizon; granddaughter of Salvacion Orencillo Peñaflor and Carolina Agdeppa Dizon. Born from a collective dream where the ancestors danced, drummed, and sang around ceremonial fire in the mountain tops of the arkipelago - she is a healer, choreographer, producer, educator, and interdisciplinary artist of Kapampangan, Ilokano, and Bikol descent who envisions a future where our indigenous traditions co-exist with(in) our urban landscapes. Born and raised in LA County/Tongva Territory and a settler in San Francisco/Yelamu, she invokes ancestral healing and ritual within/around the intersection of performance art, dance theatre, music, and multimedia; their role as kinetic storyteller and healer is ancient medicine from their maternal lineage. SAMMAY is the Founding Artistic Director of intergenerational multidisciplinary arts festival - URBAN x INDIGENOUS, Founding Member of international Indigenous contemporary artist collective - I Moving Lab, and Core Member of acclaimed street dance theatre company - Embodiment Project. She is a three-time recipient of the "Presented by APICC" Artist Award; YBCA Public Imagination Fellow 2018; and first-ever Featured Artist for United States of Asian America Festival 2018. SAMMAY holds a B.A. in Media Studies and Sociology with minors in Dance & Performance Studies and Global Poverty & Practice from UC Berkeley. To follow her journey through the diaspora: www.sammaydizon.com.