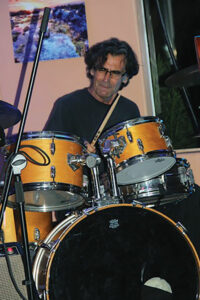 Well known on Maui, Paul Marchetti studies drums and percussion in New York and has performed and recorded with artists such as Mick Fleetwood, Eric Marienthal, Walter Becker, Michael McDonald, Michael Buble and many more. He started his career in 1973, touring and
recording with Peter Yarrow of Peter, Paul and Mary. Marchetti has appeared on national and local television shows and recorded and toured with an international list of artists.